On this episode, we begin our discussion of the work of Jean Baudrillard.

Listened to Episode 124 – Simulacra and Simulation – Philosophize This!.

Getting a bit of an initial handle on Simulacra and Simulation .

So… postmodernism says everything is contextual. There is no absolute truth, or grand narratives for people to follow ideologically.

If we have no grand narratives for people to follow in a postmodern society, what might happen?

One thing Baudrillard says is that rampant consumerism becomes a way of creating identity in the absence of it being provided from elsewhere.

And that as everything is so mediated, the way most people experience the world becomes a simulation of the actual reality of things. See The Gulf War Did Not Take Place.  I hope I’m not adding to this state of affairs by listening to a podcast about the book rather than reading the book. 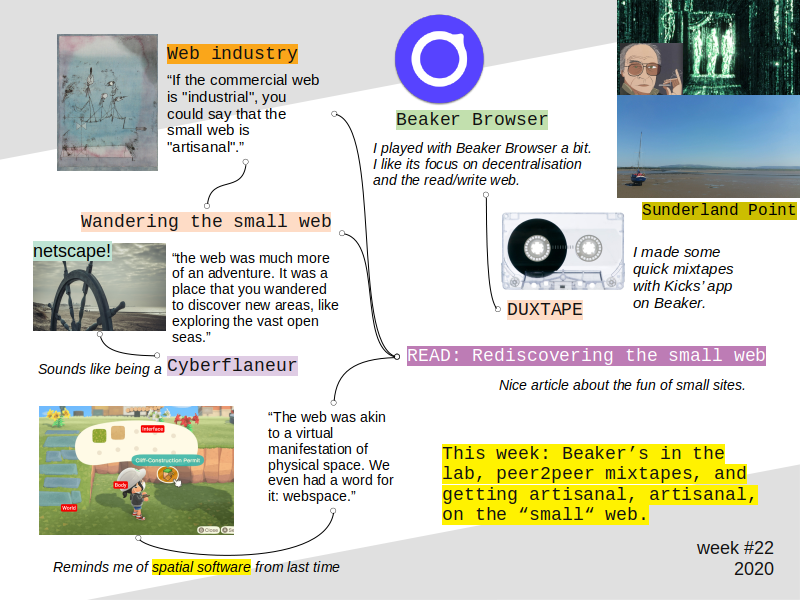 These are fun, but not entirely convinced they are worth the effort keep them up.  But perhaps something good will come of them.

Woop! Excellent stumbling, I’m frankly amazed/excited to know you came across it somehow 🙂

I would dearly like to take that navigation past just the first page – some day, when time permits.

I cycled to a tiny place called Sunderland Point today.

To get there you have to go via a small road through a salt marsh that may or may not be passable, depending on the tide. I like salt marshes.

According to Wikipedia, “Sunderland is unique in the United Kingdom as being the only community to be on the mainland and yet dependent upon tidal access.”

It’s got a shitty history as being a port that was part of the slave trade. Sadly there’s quite a bit of that history around Lancaster.

I’ve been having fun making a couple of playlists on Kicks’ Duxtape.

I’ve always seen mixtapes a way for discovering artists, not piracy. As it’s on hyper/Beaker, the mixtapes are in theory hosted decentralised and less likely to get taken offline.

For some artificial constraints, I’m making them all 6 tracks, under 30 minutes, and picking out tunes based on the alphabetical order of the artists.  (And naming them after peaks in Wainwright’s guides to the Lake District…)

This reminds me also of the design of Animal Crossing.

The article where I first came across the term ‘spatial software’ cites Animal Crossing as a good example of it: darkblueheaven.com/spatialsoftware/

I haven’t played it, but it sounds fun – I also have a friend who enjoys watching a chat show that currently happens in Animal Crossing!

No, the web was much more of an adventure. It was a place that you wandered to discover new areas, like exploring the vast open seas. A new virtual space that lead to all kinds of strange, interesting, exciting places. This is what the web was like, at least, in our collective imagination.

Today’s web browsers want to be invisible, merging with the visual environment of the desktop in an effort to convince users to treat “the cloud” as just an extension of their hard drive. In the 1990s, browser design took nearly the opposite approach, using iconography associated with travel to convey the feeling of going on a journey.

This feels related to spatial software. A return to the notion of journey, space and travel. A desire that has been expedited by being stuck at home. What was the reason for the original flattening?

Navigation. Exploration. Browsing. Surfing. The web was akin to a virtual manifestation of physical space. We even had a word for it: webspace. In Geocities, this was expressed with the notion of neighborhoods, creatively-named categories like Area51 for sci-fi, Heartland for families and pets, RainForest for the environment, Vienna for classical music, CapeCanaveral for science and mathematics.

I’m happy to say that Duxtape is has returned to Beaker Browser. Hide your mixtapes here. hyper://5b6920…e0/.