#BlackLivesMatter
I took a set of digital kitchen scales to the local Restart Party yesterday, and had a go at fixing them with lots of great tips and advice from Gavin, a Restart volunteer.  Couldn’t get them working, but I picked up some good tips in the process.

The scales are the Salter brand, model 1036.  They were donated to me in a non-working state – the scales wouldn’t turn on.

Is it in warranty?  This is the first thing you should check – if it’s in guarantee, and it’s failed in some way covered by the guarantee, get the original manufacturer to fix it.  Salter in fact offer a 15 year guarantee on all of the kitchen scales.  But given that this was donated, there was no proof of purchase, and I didn’t know where it was originally purchased from, so return wasn’t a great option (and completely honestly, I kind of wanted to have a go myself.)

I’d put a new CR2032 battery in already, but just to rule out it being a simple battery issue, we checked the battery with a multimeter.  2032s are 3-volt batteries, and we got a reading back of 3.16, so everything was fine with the battery.

The CR2032 is a 3-volt battery. If the measured voltage reads less than 10 percent of the rated voltage, then the battery needs to be replaced. For the CR2032, that voltage would be anything less than 2.7 volts.

So next step was to take the battery out and then open the scales up and to have a peek around.  There are no visible screws anywhere on the unit, so the most likely options for their location is under the rubber feet or under the label on the bottom.  I took a look online for some design diagrams first, but could only find PDFs of the (very basic) user manual.  There’s one question and answer on the 1036 on iFixit, and the answer suggests looking under the feet and the label. So I gently pried off a couple of the rubber feet, but nothing under there – then tried under the label.  It tore when pulling it off, but lo and behold yep two largish cross-head screws.  Undo those and you’re in. 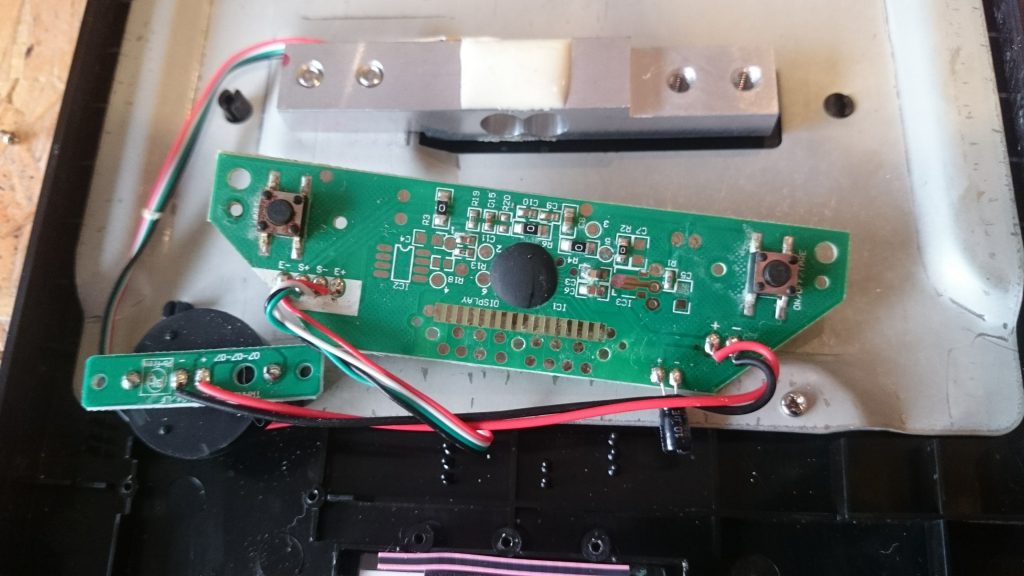 Those screws went directly into the load cell, which is at the top of the image above.

So when we saw the flipside of the control board, we could see there was quite a lot of corrosion.  The next step then was to try and clean the circuit.  First I used some compressed air to clean off some of the debris, and then we had IPA (isopropyl alcohol) and cotton buds to hand, so I had a go with that.

A lot of the corrosion came off, but some of it was quite stubborn – the damage was pretty bad.  I didn’t manage to get all of it off.  A close look at the board through an eye loupe showed some of the components looked pretty messed up.

It didn’t look particularly promising, but I boxed it all back up again, put the battery back in and tried to turn it on – no joy.  Seems like the board was too damaged.

Seems like the only solution would be to contact Salter and see if replacement PCBs are available for the scales.  Not going to hold my breath on that one, but no harm in getting in touch.

The way to prevent this particular problem would be to try and avoid getting any water in the scales.