I experimented recently with setting up an Indieweb WordPress site as a standalone actor on the Fediverse. Thanks to the WordPress indieweb plugins, and Bridgy Fed, it’s pretty easy to do, with a few quirks. 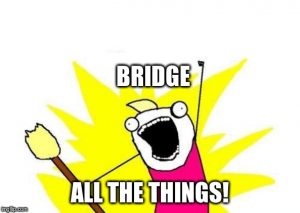 This post is a bit of preamble as to what this means and why you might want to do it. Part 2 will go in to the details of one way to do it that I’ve played with – via Bridgy Fed.

The Indieweb is a people-focused alternative to the “corporate web”. You do most of the stuff you’d do on Facebook, Twitter, Instagram, etc, including interacting with other people, but on a site that you control, with full ownership of all the things you post. It’s a bit like a blog on steroids. You can build your own indieweb site from scratch, you can get a jumpstart with something like WordPress, or you can sign up with a site like micro.blog (or soon get hosted with Koype) where it’s as simple as joining and using Twitter. There’s tons more about the whys and hows on the indieweb wiki.

As with the indieweb, the Fediverse is a way to interact online, without belonging to the big social network silos. It’s taken off in a big way of late thanks to Mastodon, but the ecosystem is much bigger than that.

What’s the difference between them?

I’m by no means an expert on either, but in my mind, at a very abstract level, in terms of goals, there’s really not a whole lot of difference between the two. (And they were in fact almost one, if you read a bit of the history of their development!) At their heart they’re both independent, decentralized ways to do social media outside of the big megacorps.

That said, when you get in to the weeds of it there’s definitely differences in approach, mostly in terms of the underlying protocols, the modes of implementation and hosting, and the flavours of decentralisation. (But as we’ll see, those differences are not really al that clear-cut.)  Technical gubbins aside, there’s also the community-aspect of both that applies to any social network – what do people talk about?  how do people treat each other? how is the community moderated?  etc.

In terms of protocols, you could write a whole series of posts on them. In a gross simplication, probably the main things to think about are the client-to-server (C2S) part – how users actually create posts; and the server-to-server (S2S) part – how these posts get distributed out to other people.  Fediverse is lately settling on primarily ActivityPub for this, and Indieweb has a collection of standards, with Micropub and Webmentions doing the C2S and S2S hijinks respectively.  There’s plenty of other bits and pieces involved, like authentication, privacy settings, markup and parsing and subscribing and reading, etc, but I feel like what you post, how you post it, and how others can see it and interact with it, are the interesting bits to compare and contrast.

From what I’ve seen, Indieweb hosting tends to be more distributed/P2P, in that individuals set up their own sites that communicate with each other directly. The Fediverse tends to be federated, in that users join an existing instance, hosted by someone else, with hundreds of other users on those instances who also just have an account.

(A simple way to think about federation is how email works – we don’t all have to send messages through Mega Email Corp (in theory…). You can be on Gmail, I can be on ProtonMail, someone else can be on AOL, someone else can run their own SMTP server – yet we can all communicate back and forth freely because these services are using the same protocol.)

However – you could think of joining something like micro.blog as kind of like joining an ‘Indieweb instance’, where you just have an account and someone else deals with the plumbing, and you can quite easily host your own Fediverse instance with just you on it as the sole user, and plenty of people do.  So the lines are pretty blurry.

There’s more of a plurality of implementations on the Indieweb, in that a significant number of people have implemented the protocols on their site from scratch (with lots of reuse of tooling and libraries, of course) – plurality is in fact a guiding principle. But there’s also WordPress and Known implementations where you get much of the functionality out of the box should you want (it’s what I do). In the Fediverse, there’s some flagship projects that implement ActivityPub and compatible protocols, such as Mastodon, Pleroma, Hubzilla, Pixelfed (and plenty others). But you could also build your own site and implement ActivityPub if you wanted, too.

To my mind, any decentralisation effort should allow you to host your own installation if you want, and build your own implementation if you want, for those that love to (and have the time to) tinker or want maximum control; OR get an account somewhere else, with absolutely minimal effort, for those that just want to get up and running. Both types should be able to communicate with each other, not caring about where they’re hosted.

Both the Indieweb and the Fediverse allow for both of those.

The community-aspect could have blog posts a’plenty by itself too. My own hot take on it is that the greater ease of getting an account means the Fediverse is bigger and more diverse. It’s a frothing hotbed of lunatic fringes (and awesome because of that). Also with that seems to come a great deal of self-reflection of general community management (content warnings, etc).

At present, the more P2P aspect of Indieweb makes it feel a bit like it only has one community, itself. And that community (again, only my own observations as far as my interactions have taken me) feels very tech-oriented at present. All the great stuff happening with readers and groups might change that.  There are likely whole swathes of Indieweb peeps that have simply never blipped on my radar.  A huge win for me of the Indieweb community is the concerted effort made to meet in real life, with local Homebrew Website Clubs, regional IndieWebCamps, and global summits.

Personally speaking, I got involved with Indieweb before I found the Fediverse, and I really like a number of aspects of it – the excuse to tinker around with my own website, and the regular IRL activities, are big wins for me.  But I’m also active on of the Fediverse, where I have an account on social.coop, and I get much more in the way of general discussion and interaction there for now (be it politics, tech, useless memery, etc). There’s nice fun people on both, so why not be a part of both? Bridges not walls eh. I’m of the opinion that different approaches help inform and improve each other; a positive symbiosis rather than a competition.  I bloody love bridges.

How to be on both

So focusing on WordPress, there’s a few different ways that I’ve come across to connect the Indieweb and the Fediverse:

The super simple way, which I currently do with my site, is the Indieweb concept of POSSEing – publish to your own site, syndicate elsewhere. When I make a post on my website, I send an additional copy to my social.coop account (and that’s where I tend to get the most interaction at present.) I do this via the Mastodon Autopost plugin for indieweb and the Syndication Links plugin. One benefit of this approach for me is that I like the ‘local’ timeline of the social.coop instance, which is why I’ve continued with an account there for so long. As an independent actor on the Fediverse, I’d actually lose some of that (unless I used a Fediverse platform that supported groups.)  The interactions only exist in the Fediverse though – nothing comes back to me at my site.

Pterotype and WordPress ActivityPub are WordPress plugins that gives your blog an ActivityPub feed. Installing one of these plugins turns your site in to something that the rest of the Fediverse can see and follow as if you were on an instance. This is super cool and other than the fact that you have a site that you own and control, these approaches are essentially Indieweb agnostic.  Personally I want to continue with all the Indieweb goodness and interact with other Indieweb sites.  I imagine these plugins play nice with all the other Indieweb plugins, but disclaimer: I haven’t tried either.  As I already have Webmentions set up, just popping Bridgy Fed in to the mix seems like a simple and safe approach.

And finally there’s Bridgy Fed. Bridgy is an amazing long-runnning Indieweb service that creates various bridges between Indieweb sites and other social networks. It lets you get all the benefits of the Indieweb while still having a foot in the door of the old world of Twitter, Facebook, etc. It basically translates between the Indieweb method of server-to-server communication (Webmentions), and whatever language the other networks speak. Part of this translation is also pulling back interactions from the remote networks to your own site.

And Bridgy Fed does this same thing, but for the Fediverse.

To me, Bridgy Fed makes the most sense if you want to follow an Indieweb approach, but also want to exist on the Fediverse as an independent entity, and aren’t tied to a particular instance already.

(PS – a middle ground would be to have Bridgy interact with a Fediverse instance exactly like it does with say Twitter.  So you interact with the Fediverse via an instance, not as an individual actor.  But that would require plenty of effort and probably a pull request 🙂)

(PPS – all this is an Indieweb site integrating Fediverse protocols – but you could also flip the question and talk of having a Fediverse implementation support Indieweb standards like microformats, Micropub and Webmentions.  But that’s another story.)

So anyway – I got things working with Bridgy Fed and WordPress, and I’ll describe that in a follow-up!

10 thoughts on “Bridging the Indieweb and the Fediverse with Bridgy Fed, part 1”